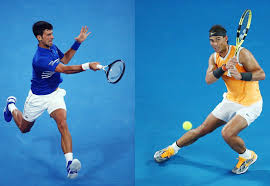 The reason for mentioning the period of dominance and age is due to the fact that during each player dominant years, they collected a lot of titles and statistics while keeping their opponents own. However, in the end the number of major title is almost equal no matter who ends up on top. So what really sets them apart is the head to head competition plus other stats.

Djokovic leads 27-23 overall, 5-3 in Masters Finals, 14-6 in all Finals, and 4-1 in Grand Slam Finals while Federer won only once in the 2007 US Open Final which was Djokovic’s first ever Grand Slam Final. Besides, Djokovic has defeated Federer three times in the Wimbledon final without losing once. This is a very significant as Federer is widely popular the greatest player in grass court. Federer has only beaten Djokovic once at Wimbledon in a 2012 semi final.

Federer won the vast majority in the first few year of the rivalry and Djokovic has dominated in the last several years. While the majority of their matches over the years has been very competitive, the best one is the 2019 Wimbledon final in which, Djokovic prevailed as he always did in the important matches versus Federer.

Djokovic leads 15-11 in all Finals, 29-26 overall, and a tie 3-3 in Masters Finals and 4-4 in Grand Slam Finals. It is worth to note that Djokovic has defeated Nadal in 4 Grand Slams including French Open where Nadal has won 12 titles and only lost 2 times since 2005. Federer never win Nadal at the French Open in 6 times including 4 finals along and two semifinals.

These are possibly the most entertaining and greatest matches in the history of tennis in which Nadal leads on clay 17-7. 7 losses to Djokovic is mostly on clay than Federer, Murray, Wawrinka combined.

These two player has similar style of baseline counter-punching. Every match is a pleasure battle to watch.