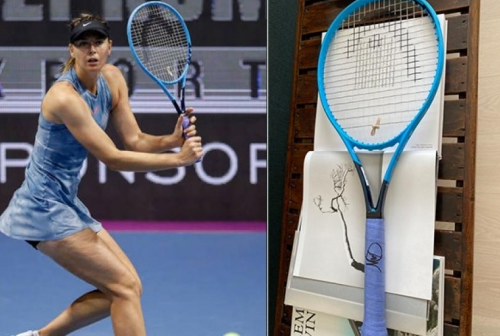 The top stars are constantly taking meaningful actions to contribute a part to help prevent the COVID-19 pandemic.

The COVID-19 (Corona Virus) pandemic is raging around the world. Like many other sports, tennis also has to postpone and cancel a series of tournaments. The leading stars in the period of social isolation have had many charitable activities and responded to join hands to contribute to reduce the bad influence from the pandemic.

After joining in the charity fund to help victims affected by COVID-19, Roger Federer and Novak Djokovic also responded to the #tennisathome movement. This is an activity initiated by Roger Federer, the Swiss legend, who posted a video playing the ball against the wall and called for a series of other tennis stars to respond. This quickly became a popular trend on Twitter and now the world’s No. 1 player responds with a similar video.

Meanwhile, Maria Sharapova continues her charitable efforts. She recently auctioned a racket with her signature on 32auctions.com. The starting price offered by Russian Dolls is about USD 100, each time raising the minimum price of USD 50. All proceeds from this activity will be used to support a charitable health organization to help the less fortunate victims in the world.

Like Sharapova, Rafael Nadal also organized an auction to raise money for the Charity Fund against COVID-19. Accordingly, the clay court king auctioned the shirt he wore when winning the 2019 Roland-Garros. The entire proceeds will be donated to the Spanish Red Cross to combat the COVID- 19.

US Open 2020 is in danger of being canceled. The US Tennis Association (USTA) recently issued a notice regarding the complicated development of the pandemic. Accordingly, USTA requires its players and fans to comply with the social and social isolation and isolation rules. Encourage everyone to stay home as much as possible.