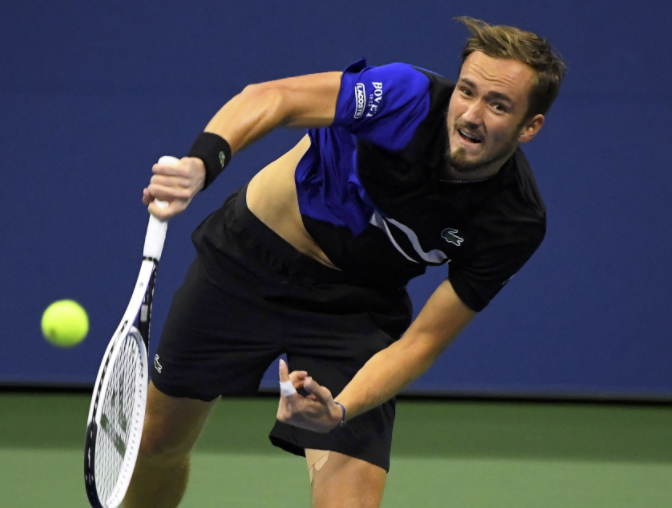 Cervara – the best coach of 2019 – has a great influence on Medvedev’s diverse tactics. Whenever asked about his next opponent, Medvedev always said that he would discuss with his coach before choosing a strategy. Cervara did not have a name when playing but has been astute when he has been with Medvedev since 2014.

Medvedev has reached six consecutive finals in 2019, including Cincinnati, the Shanghai Masters, and the US Open. The performance of the 24-year-old has declined since the beginning of 2020, but now he is stronger than ever.

In five games at the US Open this year, Medvedev has not lost a set. He lost only three of the 68 delivery games. He could become the first player to win the US Open in the Open Era, without losing a set.

Medvedev found his form again at Flushing Meadows thanks in large part to his ability to serve. His win rates for first and second serve in the five previous US Open tournaments were 75% and 52%, respectively. At Flushing Meadows, the rate increased to 83% and 62%.

Medvedev’s deal is more dangerous than ever

Medvedev still has points that can be exploited. Medvedev’s latest defeat at Cincinnati Masters 2020 shows many of the Russian tennis players’ weaknesses. He overwhelmed Roberto Bautista Agut in the first set. Moving into the second set, Bautista changed tactics.

The Spanish player hit the net more, hit the ball more durable, took advantage of forehand shots, aimed at Medvedev’s right hand. He couldn’t catch up with Bautista’s tactics. Medvedev’s forehand has never been a strong point. In the end, Bautista won the gap in the remaining two sets, eliminating Medvedev.

Thiem also possesses powerful shots with his right hand to be able to gain an advantage when hitting with Medvedev. Physical fitness is not a strong point for Russian players but is a superior weapon for Thiem. A long ball or match will bring an advantage for the Austrian player.

Usually, Thiem is prized. But Arthur Ashe’s pitch has a quick ball, more in line with Medvedev’s play style. Either way, the player who wins this match is considered to have one hand on the championship.